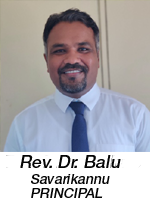 Dr. Balu was a cross-cultural missionary in Bihar. The Lord directed him with a vision “to build the builders” from Nehemiah 2:17 (“…You see the trouble we are in…. Come, let us rebuild….”) and led him to a seminary teaching. He taught Old Testament at Hindustan Bible Institute & College, Chennai, for eight years (2012-2020) and coordinated the research and publication section. Under his editorial, two volumes of the college journal were published. Dr. Balu has published writings on Biblical laments, prophets, and Old Testament theology. He has also written study Bible notes for Ezekiel and Lamentations.

He is an ordained minister and preaches in churches. Mrs. Margaret Balu, his wife, is also a theologian. They are blessed with two sons, Sashwath and Samarth. 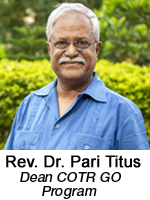 Rev. Dr. Pari Titus is the former principal of COTRTS. Currently, he is serving as the dean of COTR Global Online program. Dr. Pari comes from Salem, Tamilnadu. He did his B.Th at South India Biblical Seminary (SIBS), B.D and M.Th at Union Biblical Seminary (UBS) at Yavatmal/Pune, and PhD in Missiology at CIME, Bangalore. After serving in various leadership responsibilities and as the Principal at Bethel Bible Institute, in Salem, Tamilnadu (1982- 2007), he took the leadership as the Executive Director (2007-2016) at Bethel Agricultural Fellowship), an NGO involved in Child care, Education, Heath, Agriculture and Community development projects in Tamilnadu

He is the ordained Presbyter of the Church of North India and served as the senior Chaplain of the Bethel Gospel Fellowship in Tamilnadu. Dr. Pauline Titus is his wife, and she holds a Doctorate in Christian ministry. They are blessed with two sons Praveen Samuel and Prakash Stephen 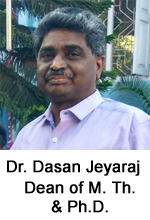 Dasan Jeyaraj, comes from Sawyerpuram, Tamil Nadu, and raised through Bethel Fellowship, Salem, He did his B.Th. at South India Biblical Seminary (SIBS) with three College and University awards, and continued BD and M.Th. at Union Biblical Seminary (UBS) at Pune, MA at Annamalai University, Chidambaram and Ph. D. in Missions at Utrecht University, The Netherlands. He has published more than 10 articles, edited several books and published a book.

He has been serving at various leadership responsibilities in Operation Mobilization, India, such as evangelism team leader and state coordinator, the Principal of the International College of Cultural Studies, Hyderabad (1996-2011)

He has been serving as the adjunct faculty of SAIACS, Bangalore, Calvin Institute of Theology, Hyderabad, Centre for Contemporary Christianity, Bangalore and International College of Cultural Studies, Hyderabad.

Rev. Dr Dasan Jeyaraj is the Dean of M. Th. and Ph.D. Studies and Professor of Missions, History and Contextual Theology at the CHURCH ON THE ROCK THEOLOGICAL SEMINARY. Married to Indra and blessed with two daughters Annie Preethisa and Anuja Premika. 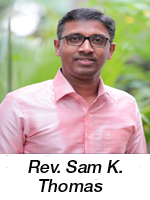 Rev. Sam K. Thomas is our pastor-teacher. He did his BTh (2005) and BD (2009) in Serampore University. He also holds an MBA (2016) from Amity University. Currently, he is doing his Ph.D. research in Mission & Intercultural Studies at SHUATS at the University of Allahabad.

Rev. Sam has been involved in teaching and pastoral ministry for two decades. He pastored churches in his native place, Kerala, and many other places such as Haridwar, Nagpur, Qatar, Oman, and Pune. He also founded a Christian mission called Christ Generation Assemblies (CGA).

Rev. Sam is married to Mrs. Lea Sam, the CEO/Principal of Navjeevan Public School. They are blessed with a girl, Jennifer Sam Thomas. 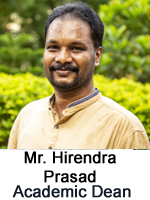 Mr. Hirendra Prasad originally hails from Odisha. He has B.A. degree from Berhampur University (Orissa). He did his Master of Divinity at South India Baptist Bible College and Seminary, Coimbatore, and Master of Theology (New Testament) at Hindustan Bible Institute and College, Chennai. He has been working in COTR Theological Seminary since 2014. He is the Academic Dean and also serves in the COTRCOM Publication department. He is married to Mrs. Silpa Mol. 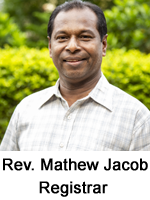 Rev. Mathew Jacob comes from Kerala. He did his M.A. (Philosophy) from Andhra University and B.Th., M.Div and (M.Th) at COTR Theological Seminary, Visakhapatnam He has been serving the Lord through various ministries.

He has many years of experience in Pastoral and Teaching ministry. Previously, he was Dean of Students at Grace Bible College, Haryana and Registrar at Nagaland Bible College, Mokokchung, Nagaland for seven years.

Since 1998, he has been serving at COTRTS. Presently he is working as Registrar at COTR Theological Seminary. He is also the General Secretary of New Testament Church of India. Mrs. Lydia Mathew is his wife. They are blessed with three children and a Grandson – Blessy, Blesson , Beulah and Seth Evan Mathew. 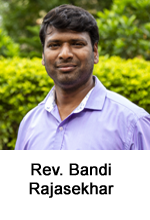 Rev. Bandi Rajasekhar hails from Telangana. He did his Master of Divinity at South India Biblical Seminary (SIBS), Bangarapet and Master of Theology at Church on the Rock Theological Seminary (COTR TS), Visakhapatnam.

Formerly, he worked as Evangelist in the Dornakal Diocese of Church of South India (CSI), and lecturer at South Asia Leadership Training and Development Centre (SALT DC), Pipariya, M.P.  in 2009-11.

He is an ordained priest of Anglican Episcopal Church. Mrs. Anitha Raj is his wife. She is a teacher by profession. They are blessed with two sons, Samuel Raj and Samson. Since 2013 he has been serving as faculty member at COTR TS. 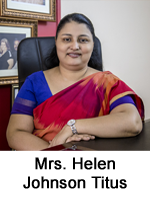 She also serves as the Principal of Nava Jeevan Christian Jr. College.  Rev. Johnson Titus is her husband and they are blessed with five children. 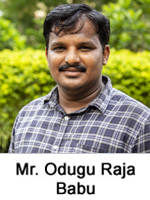 Mr. Odugu Raja Babu comes from Machilipatnam, Andhra Pradesh. He earned his Bachelor of Theology (B.Th.) at Jesus and Friends Bible College in Kottarakara, Kerala; his Master of Divinity (M.Div.) at South Asia Institute for Leadership and Cultural Studies (SAILCS) in Coimbatore, Tamil Nadu and his Master of Philosophy (M.Phil.) in Study of Religions with specialization to Hinduism through Martin Luther Christian University at South Asia Institute of Advanced Christian Studies (SAIACS) in Bengaluru, Karnataka.

He served as faculty and chaplain of Asian Bible College in Cochin, Kerala from 2013-2014. He is married to Mrs. Karuna Kumari.They are blessed with a son, Joseph Rajakumar (Prince) 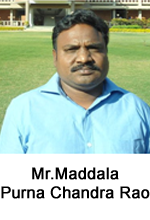 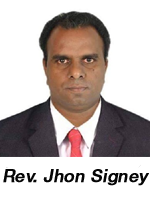 Rev John Signey originally comes from Kerala, but lives in Chennai for many
years. He did his BTh and BD at Faith Theological Seminary in Kerala and MTh
at Serampore University in Kolkata. Rev. Signey has clear objective for his
ministry: “training young people for Christian ministry to achieve the Great
Commission of our Lord Jesus Christ.” Rev John Signey taught Theology
subjects in various Bible colleges in India. He is married to C. Joy Merline and
they have two sons, Davis and Danny. They attend Elim Pentecostal Church in
Chennai. 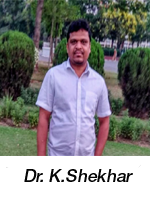 Dr. K. Shekhar is our assistant professor of Religious Studies. He hails from Telangana State. He did his B. Th and B.D at Mennonite Brethren Centenary Bible College under the Senate of Serampore College. He also did his MA., M.Phil, Ph.D. (Religious Studies) at Punjabi University Patiala. Dr. Shekhar has been involved in pastoral and mission. He also has published a few articles. He is married to Sunitha, and they are blessed with a son named Noah Augustine. 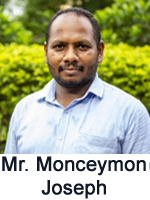 Mr. Monceymon Joseph comes from Kerala. He did his theological studies starting with B.Th. From Faith Bible College Maharashtra, Mumbai, Badlapur, M.Div and M.Th (Missiology) at New Life Biblical Seminary, Ayoor, Kerala, and PG Diploma in Ministries from Hebron Bible College, IPC Head quarters, Kumbanad, Kerala.
He made his secular qualifications, which are Engg. Diploma (ECE) from Technical Education board of Kerala completed B.Tech (ECE) from CUSAT, B.A and M.A. (Sociology) from IGNOU. He has been serving the Lord through various ministries in various capacities.
He was a lecturer in True Light for Asia Bible College, Vengoor Kottarakkara for one year and from 2018 September onwards, he has been serving at COTRTS. Presently he is working as Faulty in Mission Department at COTR Theological Seminary. Mrs. Blessy P Thankachan is his wife. They are blessed with a son, Rayan. 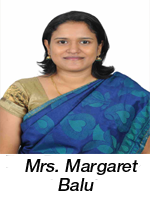 Mrs. Margaret Balu hails from Kolkata, West Bengal. She did her B.Th. at Trivandrum Bible College (TBC), M.Div. at Jubilee Memorial Bible College (JMBC), Chennai, and M.Th. at South Asia Institute of Advanced Christian Studies (SAIACS), Bangalore. Currently, she is doing her Ph.D. at AGST Philippines. She is writing a dissertation on Indian Ecclesiology.

Margaret worked among orphaned children in Kolkata. She also taught Theology at Hindustan Bible Institute & College (HBI), Chennai (2012-2019). She has published an article on Child Theology. 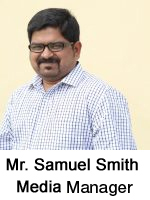 Mr. Samuel hails from Vijayawada and holds a degree in Bachelor of Theology (B.Th) and a Bachelor of Arts in Public Administration from IGNOU, Delhi. With his technical skills in Graphic Designing and motion graphics served as Sound Engineer and Audio Editor in OM India (2005-2009) and also as Operation Mobilization (OM) India film Team Leader in Uttar Pradesh.

He continued to serve in the Video Communication Department at OM India (2009-2016). He is now serving as the Media Manager for COTR media department since May, 2016. Samuel is married to Ruth and they are blessed with a daughter Nathaniya Hadassah Samuel (Pretty) and is now residing in the Dorathota campus. 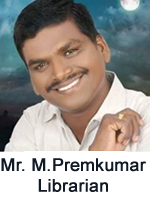 Mr. Merugu.Prema Kumar, comes from Vizianagaram, Andhra Pradesh. He earned M.A.; B.Ed,; M.L.I.S.C.Master of Library and Information Science at Andra University. He served as librarian, both at Hyderabad Bible College and S.V.S. Degree College. He has been working in COTR Theological Seminary as Librarian since 2017

WhatsApp Chat is free, download and try it now here!